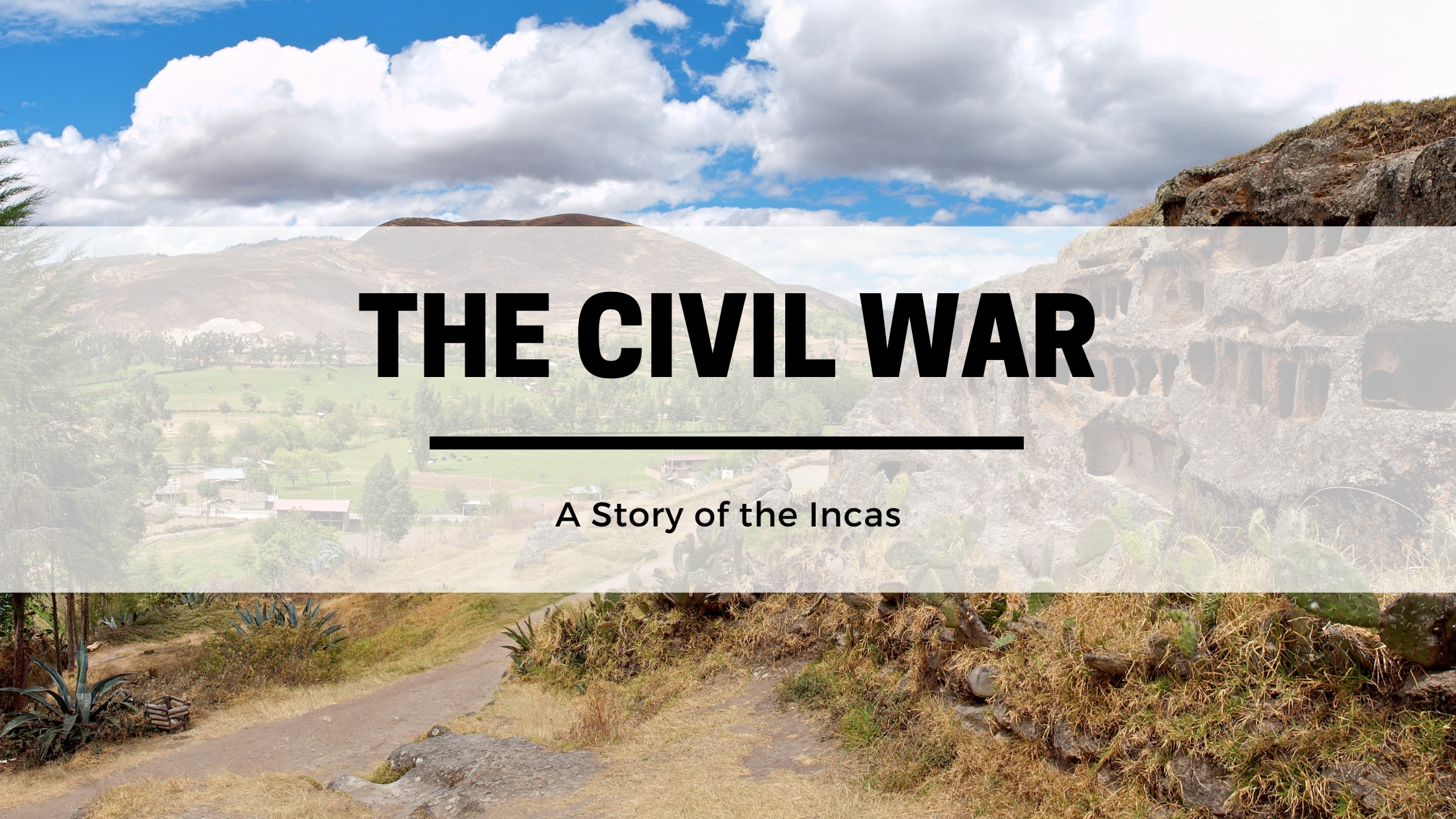 The Civil War: A Story of the Incans

There once were two half-brothers born to a great leader.  Their father expanded his civilization through a mixture of war and diplomacy.  After their father’s death, due to an illness from far off visitors, the two stood up for an opportunity to succeed their father.  After much discussion, it was determined that the brother born to the father’s sister-wife would be given the seat of power over the majority of the kingdom; and the younger brother born to a wife of diplomatic marriage would be given the much smaller northern part of which his mother was born.

Despite the struggle for the right to rule a united kingdom, the younger brother attempted to swear his own allegiance to his older brother.  But the older brother was suspicious of the offerings carried to him by the younger’s most trusted captains- and he refused them.  Wanting to send a strong message to his younger brother, he sent the captains back dressed as women.

Before his death, the younger brother was offered two choices: Convert to the leader’s religion and have a swift death by strangulation or remain loyal to his own gods and burn at the stake.  The younger brother chose to convert and was hanged.

With the younger brother’s death, was also the death of their kingdom.

Everything in the above story is true.  Not in the sense of “metaphorical truth”, I mean everything is fact.  The older brother was Huáscar, the younger brother Atahuallpa and the leader Francisco Pizarro, a Spanish Conquistador. This was the Incan Civil War which led to the destruction of the Incan Empire.  Pizarro just happened to be at the right place and time to take advantage of the chaos these two brothers had unleashed upon each other.

What really makes this story stand out to me, is their ignorance for the state of affairs in their own empire and the ones surrounding them.  Their father had never come in contact with the Spainards- even though it is believed he contracted measles or smallpox which came from them and ravaged the Southern Continent at that time- so we do not know if they were aware fo the Conquistadors themselves.  But it would be hard to ignore that the kingdom clearly had made enemies of their neighbors and maybe a struggle for kingship wasn’t the best thing to be doing at the moment.  Especially when the younger brother had made an attempt to demonstrate loyalty.

Every decision we make should be measured by what information we have available to us in order to avoid making reckless decisions that could lead to our ruin.  Today, we know that the Spanish Conquistadors likely would have won that battle regardless of the Incan Brother’s squabble.  But a story where two brothers set aside their differences to face their antagonist would have been a far more powerful legacy for the Incas than then the cowardly actions we were given.

Another lesson to be taken from this, is that rash decisions aren’t going to get you what you want- people do not respond the way we always envision them, even those we know intimately can surprise us with their decisions.  There were several rash decisions made throughout this conflict- probably dozens more if we had a full journal of what both brothers were thinking along each step.