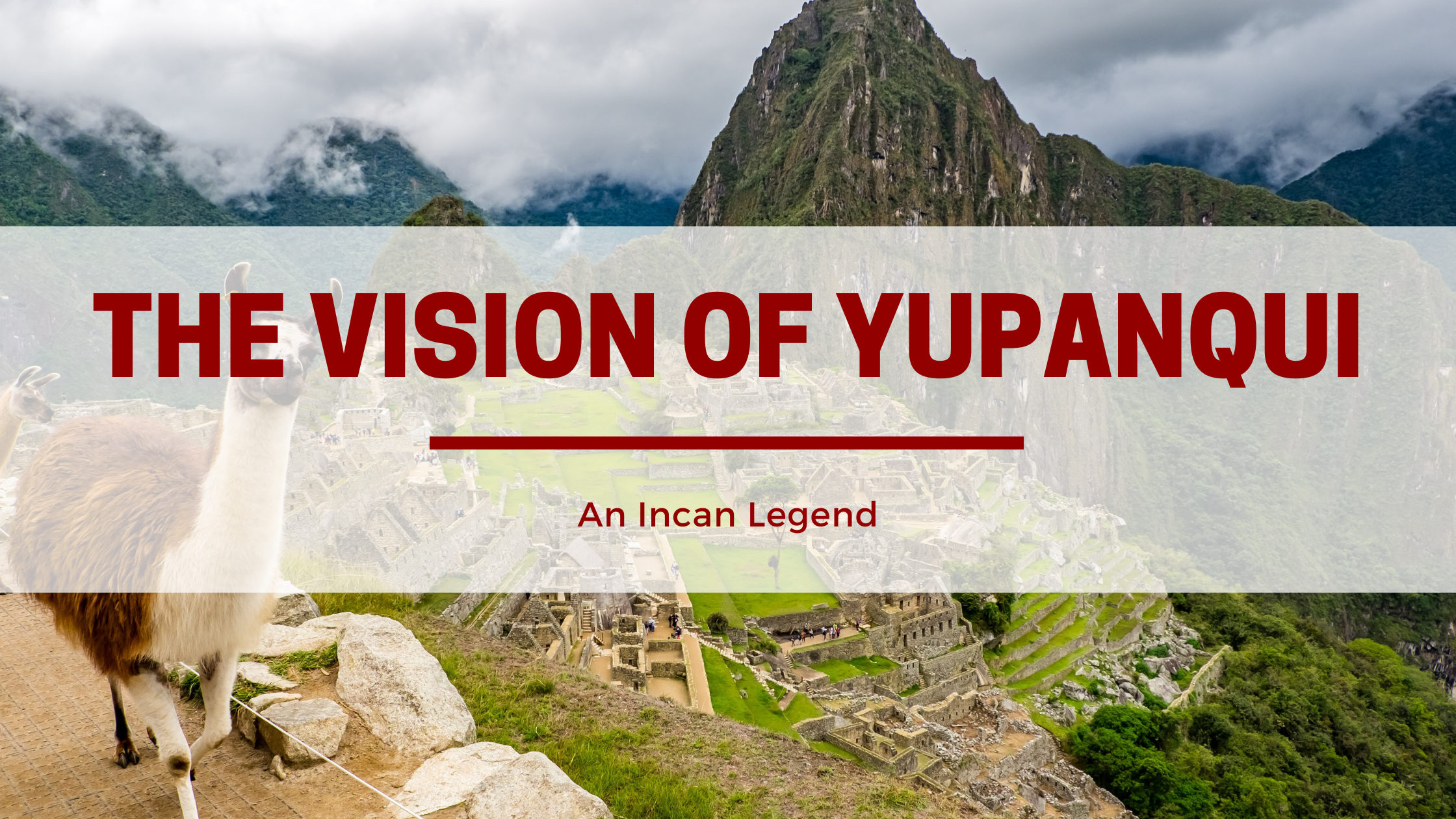 The Vision of Yupanqui: An Incan Legend

The Inca Yupanqui before he succeeded to the sovereignty is said to have gone to visit his father, Viracocha Inca. On his way he arrived at a fountain called Susur-pugaio. There he saw a piece of crystal fall into the fountain, and in this crystal he saw the figure of an man, with three bright rays as of the sun coming from the back of his head. He wore a hauiu, or royal fringe, across the forehead like the Inca. Serpents wound round his arms and over his shoulders. He had ear-pieces in his ears like the Incas, and was also dressed like them. There was the head of a lion between his legs, and another lion was about his shoulders. Inca Yupanqui took fright at this strange figure, and was running away when a voice called to him by name telling him not to be afraid, because it was his father, the sun, whom he beheld, and that he would conquer many nations, but he must remember his father-in his sacrifices and raise revenues for him, and pay him great reverence. Then the figure vanished, but the crystal remained, and the Inca afterwards saw all he wished in it. When he became king he had a statue of the sun made, resembling the figure as closely as possible, and ordered all the tribes he had conquered to build splendid temples and worship the new deity instead of the creator. (Sacred-Texts.com)

Yupanqui went on to become a Conquest Ruler, and it is believed he founded the famous Machu Picchu.  His rulership was from 1418-1471, and started out relatively small and over the course of his life grew immensely by comparison.

He followed the guidance of what some may call “the Force”, by answering a call to adventure to become a “great” ruler.  But along the way he ruled with darkness following behind him.  In order to achieve great feats, he sacrificed many.  So great was his ego, that even after his death, more were sacrificed on his behalf:

Earlier I said he followed the guidance of what some may call “the Force”.  Over the years, I have come to find that people can find such an notion offensive when the “call to adventure” means inviting horrible actions upon others.  But I feel this needs to be understood for the truth of what the Force is- a truth that the Star Wars fiction doesn’t ignore the same way I’ve found Jedi ignore it:

The Force is both Light and Dark.  It is not one or the other.  In order to be Jedi, we have to choose to follow the Light, also called “Ashla”.  But Inca Yupanqui (also known as Pachacuti) made the choice to follow darkness (or Bogan).  According to Legend, it wasn’t merely a choice of “I will do XYZ” though, it was a choice given to him in a very direct way via a vision which he accessed by connecting with the Force.

When we enter into counsel with Force, we cannot take it at face value.  We Jedi, if we wish to be authentic to the path, need to gauge what is told to us in the Force against the Jedi Philosophy.  Or we risk becoming the villains rather than heroes in the world.