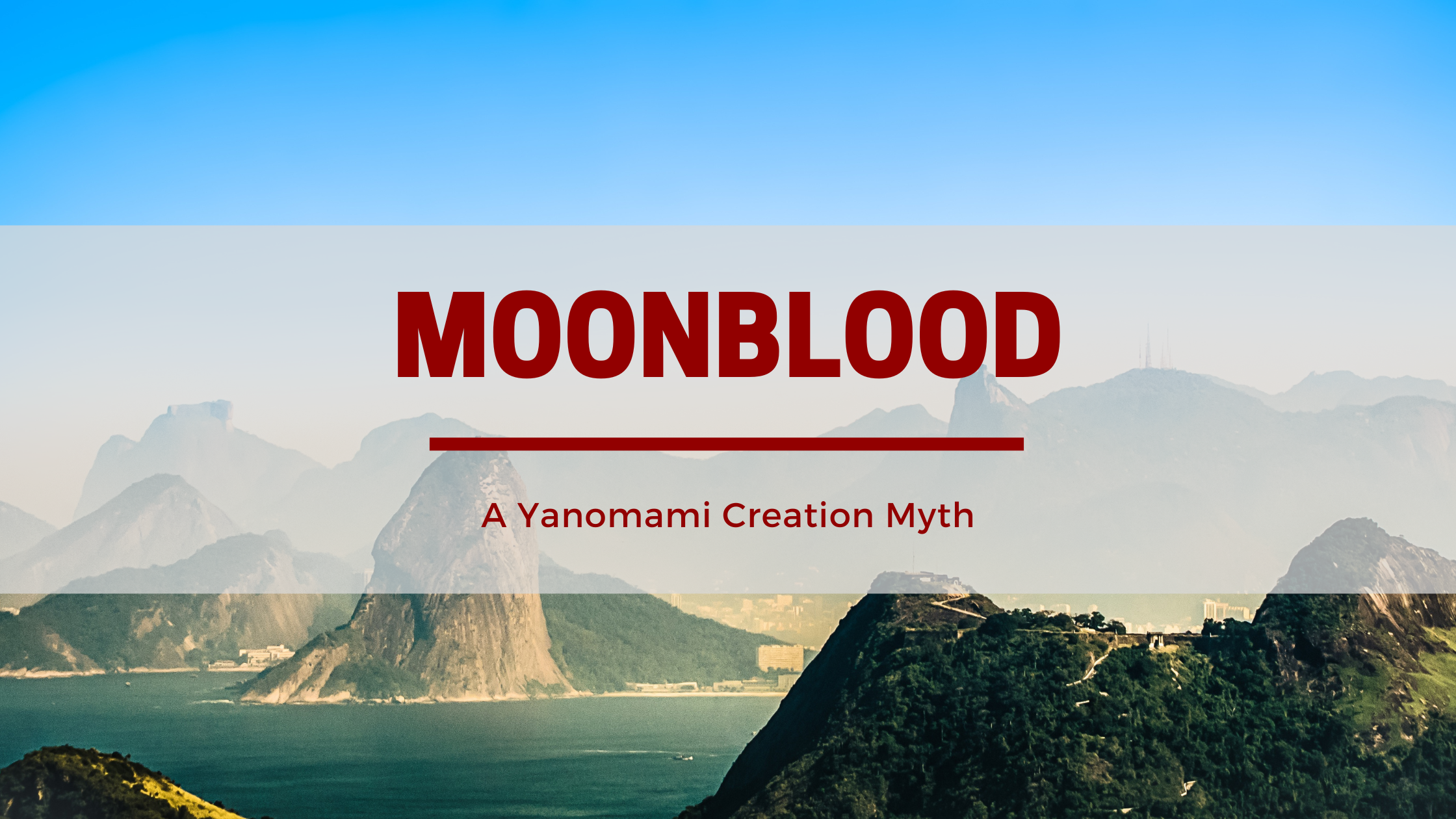 The Yanomamo are an indigenous people living in the Amazon.  Like any other culture around the world, their myths and legends serve as a way to explain the world around them.  Amongst these stories comes a creation story of how mortal humans came to live upon the face of the earth.

In 1975, a documentary crew recorded Dedeheiwa’s account of the story, which speaks of how

“Peribo, the Moon, eats the souls of children, including those of Suhirina. Suhirina, angered by this, shoots Moon with a single bamboo-tipped arrow – a rahake. He hits Moon in the belly and Moon bleeds profusely. His blood spills to the earth, forming puddles. Mortal men are created from the blood; where large amounts of the blood fall, the most violent and war- like human beings are created. They are so violent they eventually kill themselves off. Where there is only a sprinkling of drops of blood, less warlike humans are created. All men have their origin in Moonblood; if a man is fiercer it is because he has more of Moon’s blood in his ancestry.” (source, you can read the entire transcript starting on pg. 10)

In this story, we find that humans vary in their demeanor towards others around them.  Some are more bent upon violence, while others are more tame.  Dedeheiwa even points out that there are people amongst his village who are warlike and states how it is a reflection of how much Moonblood they have within them.

To the Yanomamo, it seems as though this is simply a truth of the world that must be accepted, rather than rejected.  Though, despite the fact that it is accepted, it doesn’t mean that they do not recognize it is a darkness upon the earth that such people exists.  At least, not within the context of the actual story.  Instead, it acknowledges that this warlike nature comes from an evil that was present in the world: Peribo.  From what we can take away from the manner by which Dedeheiwa seems to explain the nature of people within his own village, the Yanomamo seem to believe in a spiritual Nature over Nurture personality type.

That last part is particularly interesting to me.  Throughout the years I’ve come back to the idea of nature and nurture in personality themes.  There are certainly situations where it seems like nature cannot be fully negated.  Situations such as people physiologically or neurologically barred from being able to develop the same way that most people in the world develop.  But then you look at extraordinary cases such as Hellen Keller, who by the sheer stubbornness and will power of someone caring for her transformed her ability to be a contributing member of society.

On the other hand, we have watched people rise up to become whatever their parents or circumstances raised them to be.  Though, just as there are extraordinary cases in the nature example above- I’ve also watched extraordinary cases of people who are determined to not follow the same pattern as their parents or circumstances would naturally conclude.

So what is it?  Are our personalities formed by some sort of spiritual nature we were born into?  Influenced by a darkside of the Force which was imprinted upon our ancestor’s blood?  Or is it born from the way that people are treated?

In contemplating Dedeheiwa’s story, it occurs to me that perhaps the answer is both.  That the Force gives us the freedom to choose between our nature and our nurture. Perhaps we are each born with a more Ashla or Bogan lean, and it is up to us to either fight that nature or give into it.  But more importantly, I think the wisdom of accepting that there are people who give into their “Moonblood” helps us accept that we cannot change everyone around us- and that it doesn’t mean we cannot live alongside them so long as they keep their “Moonblood” in check.